Tjitske Lingsma is a senior freelance journalist and award winning author based in The Netherlands specialising in matters of international justice. She brings years of experience, including overseas assignments. From 1999, she was based in East Timor to cover the struggle for independence. She also spent several years travelling to the Indonesian Moluccan islands to research the sectarian violence there. In 2019 she and her colleague uncovered the case of an American priest who had been sexually abusing girls for many years in his shelter in East-Timor.

Tjitske Lingsma also works as an event organiser. In 2001, she was the public information officer for the Constituent Assembly in East Timor. In 2012 she was the coordinator of the Conference on Narrative Journalism in Utrecht. In 2018 she participated in organising a seminar on justice for Myanmar.

On 6 September 2017 the international edition & update of her book ‘All Rise! The high ambitions of the International Criminal Court and the harsh reality’ was published (for ordering, check ‘Contact’).

All Rise tells the story of the ICC, that started in 2002 and now has 123 member states. In thematic chapters it explains its history, functioning, the work of the prosecutor, life in detention, and the precarious situation of witnesses and victims. In separate chapters the dramatic cases against suspects of international crimes in Kenya, Democratic Republic of Congo, Central African Republic, Ivory Coast and Libya are presented.

A preview was published by ZAM: https://www.zammagazine.com/chronicle/chronicle-32/545-all-rise

Excerpt from All Rise - ‘Slowly the luxaflex curtain, blocking the view on the courtroom, goes up. Like a magnet, Lubanga attracts all attention. The warlord, sitting in the dock, shines like a diamond. Proudly he wears an impressive white African robe that falls loosely on his body. From top to toe, Lubanga has dressed himself especially for this day. On his head he has a white fez. In his dazzling outfit Lubanga distinguishes himself from the dark robes around him. The symbolism can’t be missed. A white dove amidst the crows. Seemingly relaxed, Lubanga folds his hands under his chin while the
magistrates have taken their seats.’

The Congolese warlord Thomas Lubanga, charged with war crimes for recruiting child soldiers, would be found guilty that day, 12 March 2012. But overall the ICC’s results are shockingly disappointing. By now the court has convicted a total of four persons for international crimes, while cases against no fewer than twelve suspects failed. (Also five persons have been found guilty of witness intimidation.) The court, which by now has cost almost 2 billion euros, is damaged by government obstruction, intimidation of witnesses, its own massive failures and member states threatening to withdraw.

All Rise was first published in Dutch, in December 2014. It was shortlisted for the Brusseprize – for best journalistic book in The Netherlands. The jury: ‘With admirable patience and dedication, Tjitske Lingsma started a journalistic quest, resulting in a thorough, all-around and most of all sobering portrait (…). Lingsma doesn’t hesitate to draw harsh conclusions, but always leaves room for the possibility that things can take a turn for the better.’

‘A rousing book that sweeps you away’ & ‘Most gripping are the testimonies of victims’ – NRC Handelsblad, The Netherlands

‘Absolutely fantastic’ and ‘a must read’ – VRT, Belgium

You can listen to an interview Richard Walker of GCC Law&Media had with Tjitske Lingsma about the ICC, her experiences researching the court and her book: http://www.gcclaw.nl/ 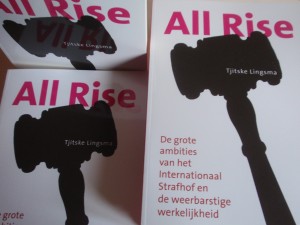 Her book ‘The Sorrow of Ambon. A history of the Moluccas’ (Balans, 2008, only in Dutch) won the prestigious Dick Scherpenzeelprijs. In awarding the prize, the jury said: ‘From the first page one knows: this is someone who can write. Seldom do we see such a fine example of meaningful travel journalism.’

The Sorrow of Ambon tells the dramatic story of the civil war that errupted in 1999 between christians and muslims in the Moluccas, eastern Indonesia. In a long flashback Lingsma traces the conflict back to the colonial occupation by The Netherlands. During her quest she meets two families, who play a main role in the book. Following their lives she tells the history of the Moluccas (colonialism, Japanese occupation, independence, civil war) and how christians and muslims finally try to stop the conflict and engage in a painful reconciliation process.

A selection of articles:

The OTP and intermediaries – a controversial relationship