‘All Rise – the high ambitions of the ICC and the harsh reality’ was published in Dutch last December – I have started translating:

The small white sign near the public entrance of the International Criminal Court (ICC) carries three vital words: ‘Pas Op! Schrikdraad.’ The vast majority of the court’s visitors however won’t notice this crucial warning. Not only because of its inconspicuous size, design and spot on the fence, but also because most visitors are from abroad and don’t understand the Dutch text that warns for an electric shock if one touches the trellis work. The long fence that surrounds the court buildings carries a few more signs. But since a version in English or French – the working languages of the court – seems to be absent, I started to wonder whether I actually had to take that whole warning seriously.

Just outside the court, right next to the public entrance, a colleague working for European media was smoking her cigarette with that enviable sense of delight exposed by addicted smokers. She was taking a break from the hearings. Every time the journalist inhaled, her head would bend dangerously backwards, almost touching the fence. For many years she had been covering the ICC and smoking her cigarettes, standing against the wall and trellis work, oblivious of the risk she was running. So I pointed at the sign and translated the words. We laughed about the absurdity of the situation. Until a tall young man, clearly in a hurry, came sprinting to the court’s entrance. When he saw my colleague inhaling, he stopped and nervously almost shouted: ‘Be careful! A few weeks ago a friend touched the fence. He got a terrible shock which blew him metres away.’

Welcome to the ICC, that forgot to inform its visitors about the dangers of its trellis work. Only when I started searching I saw a glimpse of an English sign: ‘Warning High Voltage Security Fence,’ written on tiny notices, few in number, practically invisible attached to the inside of the fence. 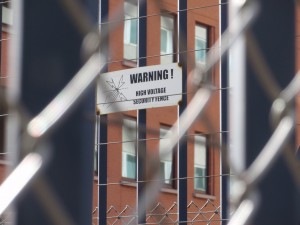 Visitors enter the building by taking the revolving door that leads to a large hall, where uniformed guards with stern faces check the arrivals. Obediently guests and court officials put their coats, bags and other belongings on the X-ray belt. They then step into the walk-through gate detector. As if they check-in for a flight. These are appropriate security measures for an organisation that is prosecuting war lords, militia leaders, military, presidents, politicians, officials and other powerful persons suspected of massive atrocities that deeply shocked humanity’s conscience.